The Tree of Knowledge is a collaboration between JP Azzopardi and Human001. It is a collection of 415 original digital artworks created from a bone sculpture. The image of the bone work was then processed by Human001 using various Ai algorithms. Once processed, the images were handed over to Azzopardi to reconstruct models manually in digital platforms. The 415 models are an extension to the Bone-work collection. Each model is unique thus no two are identical.

This collection contains two different types of resolution, QHD being the rarest and Full HD. There are four different model-types three of which are named after Angelic Beings namely Ophanim, Seraphim, Malach, and the fourth is that of a human skull.

These artworks are minted on the Ethereum Blockchain and are only available for purchase as NFTs (Non-Fungible Tokens).

The aim of this project is to research, experiment and create original and collectable digital artworks. To learn more about the concept and process press the read more button.

An inverted investigation into Hyper-dimensionality

The Tree of Knowledge is a collaborative project between JP Azzopardi and Human001 reinvestigating the creative process of a sculpture that was created in 2015 as a means for further examination, experimentation, and novel model reconstructions. Assigning this image of the sculpture to artificial intelligence (Ai) technologies and digital media platforms the aim is to explore the theme of Hyper-dimensionality, i.e. other creative processes and multiple outcomes that can potentially be formed as the bone sculpture.

A single image, a photograph of Untitled No. 5 created by JP Azzopardi was used as the object for experimentation. The image (input) of this sculpture/structure was fed into various Ai platforms by Human001 where he, modified and tweaked various parameters to then generate outputs that serve as layers, and patterns of possible structures that could have been used as other possibilities for the pre-existing sculpture. Therefore, providing a creative fancy of past, present and also future structures and outcomes (hyperdimensional). The layers generated were then handed to Azzopardi to reconstruct and reassemble into singular images (models) that could have been possible variations and manifestations of the original sculpture.


These structures that could have existed, are models of objects, not the object itself. They are a potential variant that are now crystallized (minted) in the digital domain. The images also serve as a form of mapping, creating what can and physically cannot be done. Although a large number of these digital manifestations may be impossible to construct physically into a sculpture, there is still a potential correspondence to the creative domain existing within the aether of the artists mind, or let’s say, their wishful thinking. Human 001 created thousands of images from the singular original input and handed them to Azzopardi to reconstruct more than 400 models.

This project therefore seeks to examines both artificial intelligence and the creative mind as feedback loop generators for and from a singular image. The primary input, the bone sculpture itself is from a series of works exploring the theme of Silence and Stillness. The title of the project is an alternative take on the theme and not a reference to the Book of Genesis.

The Tree of Knowledge stands still with its trunk unshakable, it’s roots firmly grounded, and its branches strong yet flexible. From its seed (as genome) grows multiple roots reaching deeply into the soil, a flexible then later, a steady trunk develops, and subsequently branches grows with leaves, buds, flowers and seeds. The seed represents the input image, the branches and the new-born spores all representing potential manifestations (models) and simultaneously still re-presenting the information contained within the original itself, fossilized structures of stillness and silence. The voice of silence is true knowledge. Each seed is a fractal of this knowledge.


There are four different categories of images, the first three refer to different types of heavenly bodies, angels, and the fourth is an image of the human skull, an obvious and direct representation of death itself. The most abstract is named after the Angelic beings Ophanim, after that is the Seraphim, and following are the Malach who’s facial features best resemble human beings, and then there is the skull. These four categories all represent different stages, styles, layers, and features of facial anatomy, ranging from the most abstract and minimalist (the Ophanim) to the denser more complex representations sporting various and varied anatomical modifications (the Seraphim) to the more obvious and humanly recognizable Malach and the Skull.

Base model creation: Each image begins by first creating a base model. This model is created programmatically with Artificial Intelligence (Ai) software. This is formed by changing the input variables of the machine learning (ML) algorithm until the desired result is obtained. The technology used is referred to as generative adversarial networks, or GANs. You may think of the machine learning model as two neural networks (a set of algorithms modelled on the human brain) that compete with each other to improve their accuracy in their predictions. One is referred to as the generator and the other the discriminator. In simple terms, the generator produces artificial outputs (based via 40 or so different numerical inputs) and discriminator looks at the result and informs the generator to tweak its output. This feedback loop between the two is continuous which results in the generator creating a better version of the initial base model until the discriminator is not able to notice between an artificial output and a real one. Both neural networks ‘learn’ with time, just as two artists challenge each other to become better.

Base model preparation: Once the GAN algorithm completes this process the image is then manually edited on an iPad to add details which will later be interpreted by different Ai software. This step is especially important for more complex shapes (ex. the Seraphim).

Boneification: The next step is inputting the image into different computer vision software based on a more advanced version of Google’s engineer Alexander Mordvintsev Deep Dream Ai. The idea behind this step is to allow the software to use Azzopardi’s Bone sculpture style and apply it to the base model. This step also requires manual editing and several render passes until the image resembles roughly one of Azzoaprdi’s Bone sculptures. More conventional software is then used to mirror the image vertically. This is the final step for each image from Human001’s side.

Polishing: Each and every image is then handed to Azzopardi to reconstruct the patterns and layers, reassembling them into a new digital model. The outcome is an extension to the Bone sculpture collection. Each piece is therefore a unique amalgamation between the Bone sculptures and Human001s expertise in Ai. 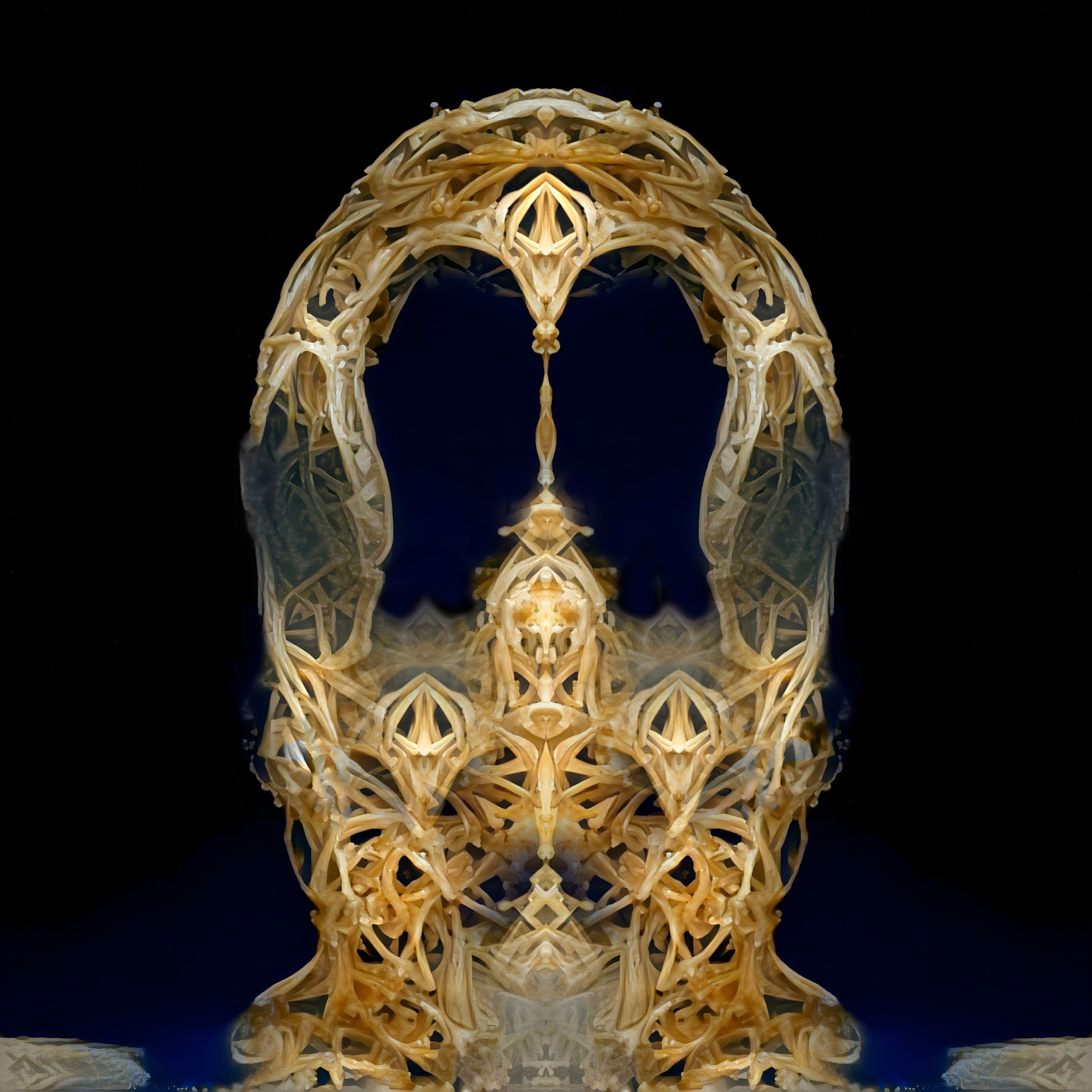 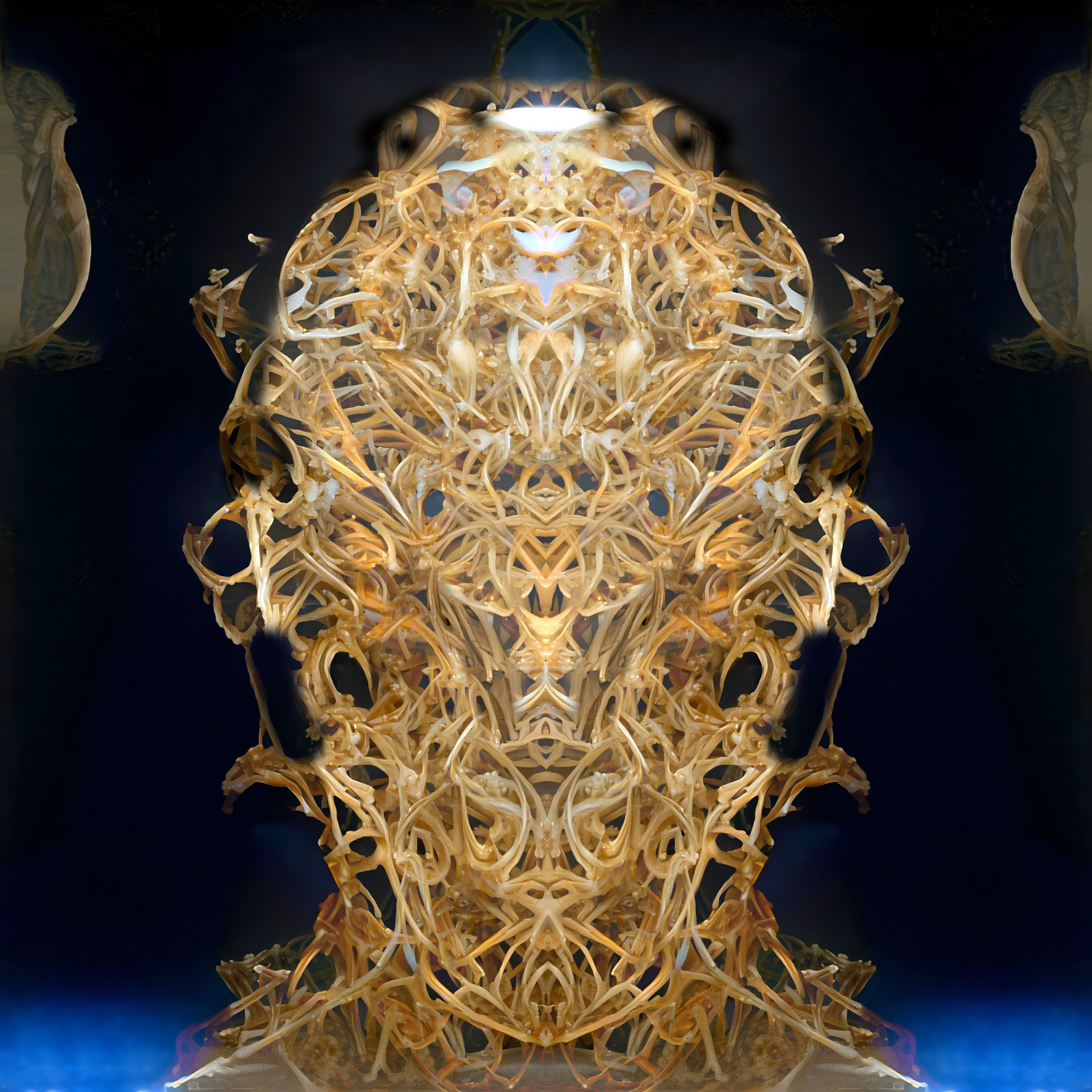 The Seraphim are the second in the hierarchy of Heavenly Beings. The word Seraphim derives from the word Seraph, meaning burning, or the burning ones. For this project they conceptually resemble the element of fire as a dynamic force. This collection is the largest yet is the most varied and technical in semi-abstract facial forms. 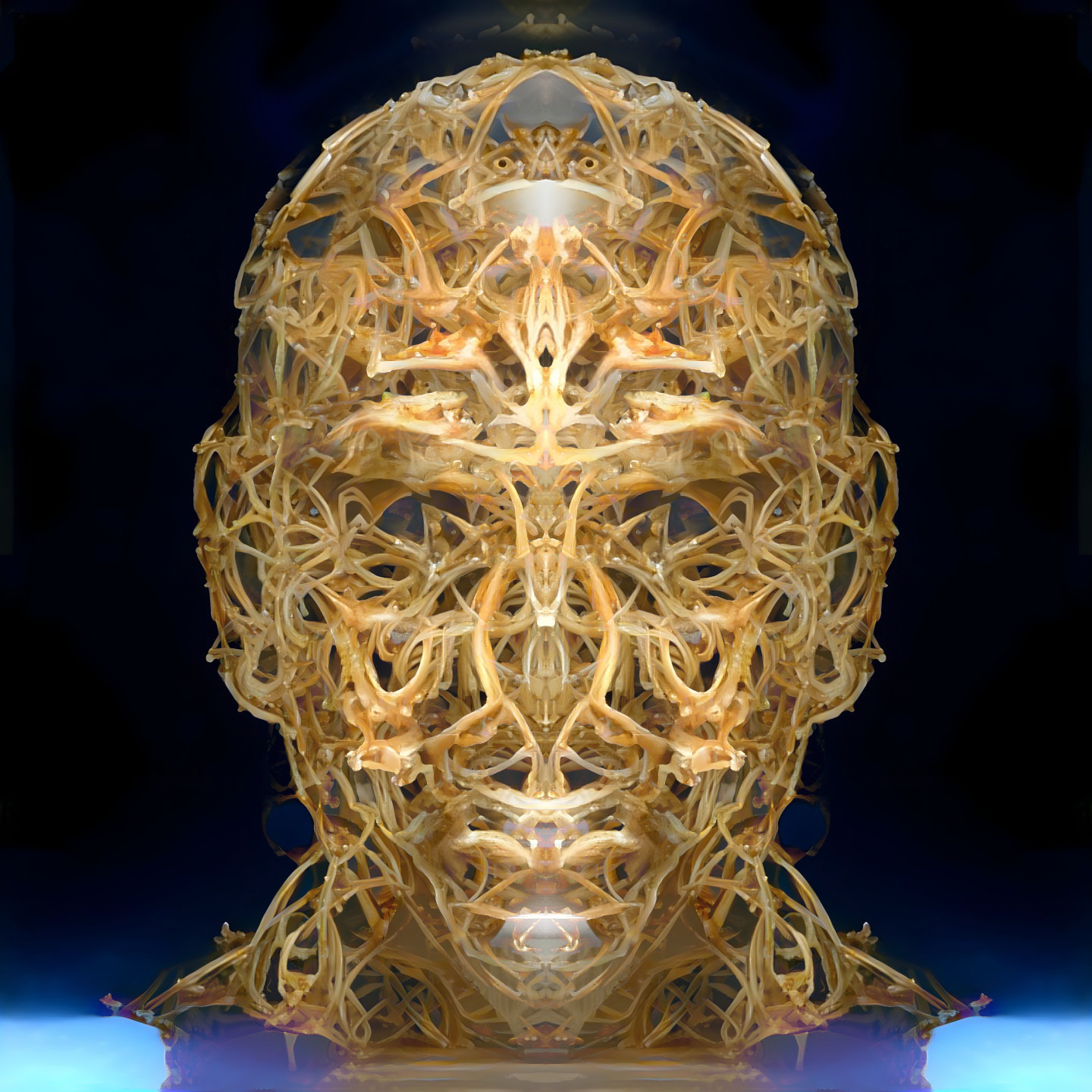 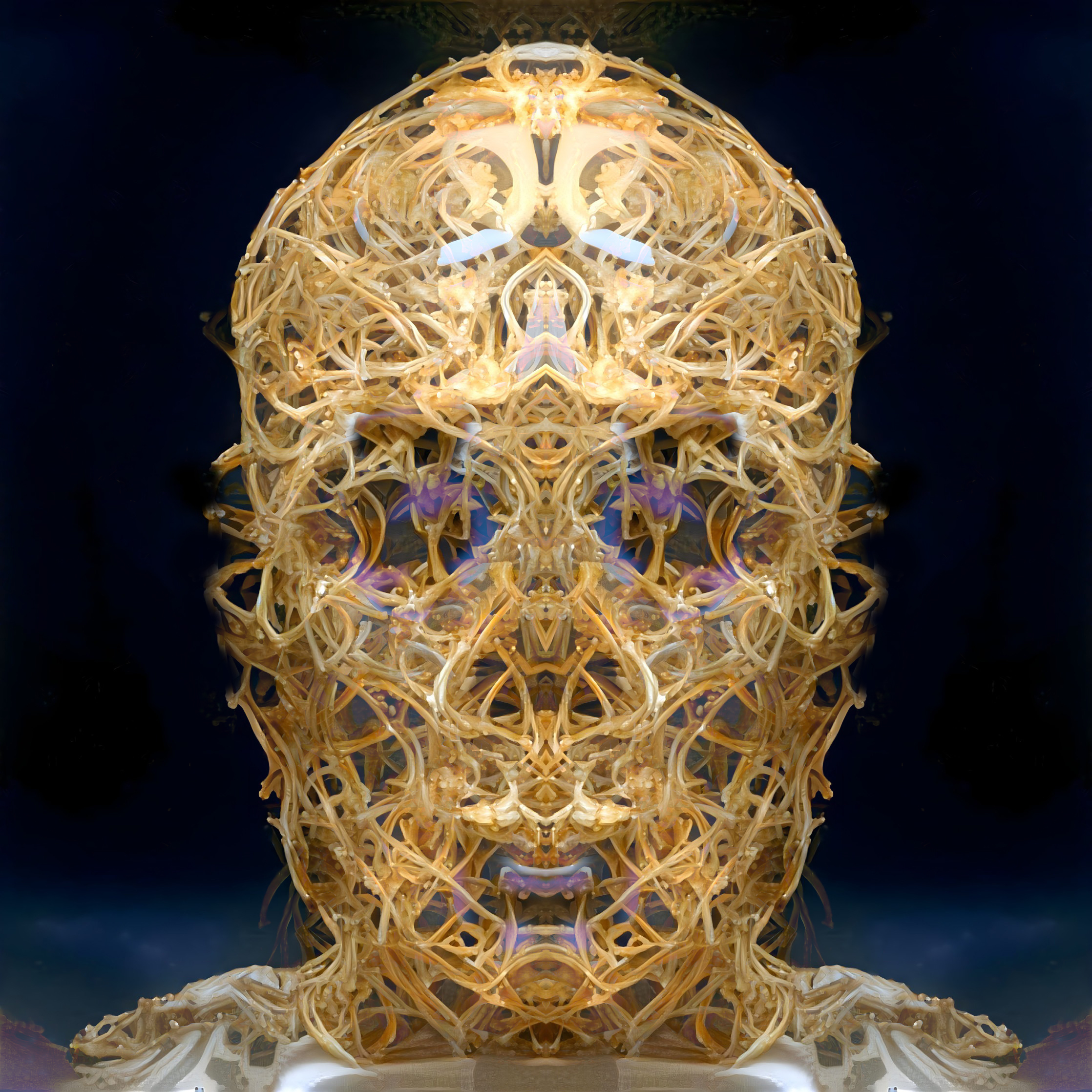 The Skull is a representation of death serving as a Memento Mori, a reminder of the transience of life. We can also say that to experience a divine state one must go through an ego-death experience, momentarily letting go of reason, self-reflection and judgement. Being absorb within the moment. This is the second rarest.