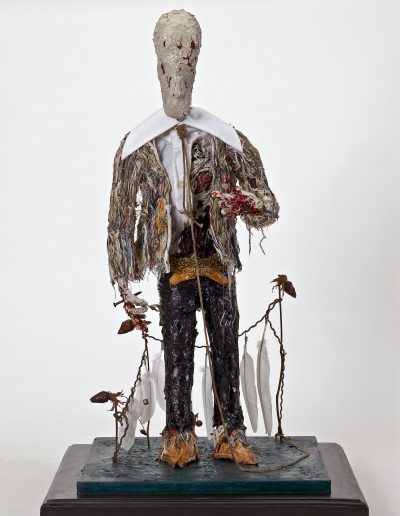 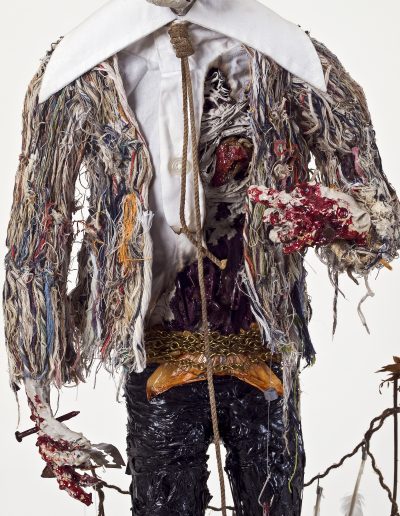 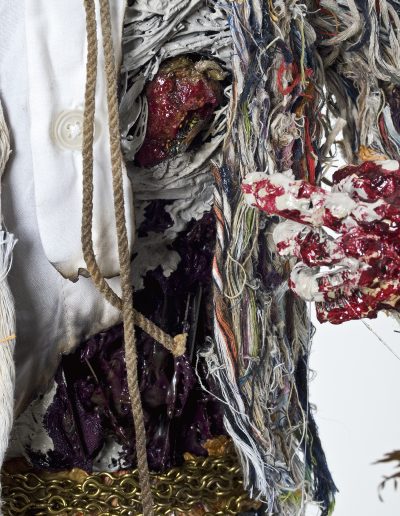 The meaning of The Sacred Heart of Jesus: In this Icon Jesus points towards his Heart, his hands a display of the nail wounds; the nails that fix his human (all too human) Nature to the Cross. An image that transcends the Cross; the right hand index crucially pointing to his centre; and sitting astride of t/his heart, cruel nature’s thorns. Above and beyond this nature soars the flame of transformation; a transcendence. The Icon portrays the Buddha’s approach to Nirvana, a seeming presence of Heaven, the golden immediate silent Nothingness within.

In some Icons, His sympathetic expression becomes confused, even mournful, creating room for different readings and interpretations, such as the moral notion of melancholic sacrifice. It is commonly understood that this feat means to conduct an action that is contrary to one’s will. The etymology of the term sacrifice stems from the 12th century Latin term sacra, sacred rites and the root of facere “to do, to perform”.

A misinterpretation of sacrifice therefore can create anxiety; overwhelming the individual from within, very deeply and profoundly. When one performs sacrifice (the transformation of the profane into the sacred), anxiety can overwhelm one without even knowing where it is coming from. Heidegger (in Being and Time) believes that anxiety comes into being because we are temporal, striving to fulfil our authentic nature.

Since temporality is the key for understanding the authentic existence of Dasein (the self: Being-in-the-world) Heidegger states that it is the only “anticipatory resoluteness” which can be grounded as a foundation for understanding Dasein (Heidegger, M: 1926, pg. 351). Thus for him re-solution is death, the unavoidable end of Dasein. This concept also implies the unavoidable sense of guilt due to the fact that since Dasein tries to live her life authentically, guilt becomes manifest.

Death is not shared, it is totally and completely one’s own. The awareness of one’s mortality contributes to a pure (limitless) resolve vis-à-vis one’s very existence. My death, my mortality is specifically mine, and cannot be shared. Therefore, death itself is crucial, and commands that Dasein must live life to its utmost.

Dasein must resolve to make choices for one’s life while concurrently keeping in view a clear recognition of limitations. It is then that Dasein can take authentic and clear-sighted stances and actions. Anticipatory resoluteness therefore implies a certain kind of care that Dasein chooses in order that it may conduct life authentically.